We need your help to reach out to your Senators

The San Gabriel Mountains Foothills and Rivers Act was presented by Congresswoman Judy Chu. The legislation adds new wilderness areas the San Gabriel Mountains National Monument, and the effect on the Angeles Crest 100 Mile course would require another road section skipping the pinnacle of the course, Mount Baden-Powell.
As a result of the 2020 election, the original HR 2215 Bill for Sheep Mountain Wilderness expansion died and has since been rolled up into HR 803.
Bill HR803 passed the house in 2021 and is awaiting the Senate to take it up. Runners should write their Senators and explain their support for the bill explaining their love for the San Gabriels, AC100, and trail work.

We are in the bill here under section 524:

(l) Authorized Events.—The Secretary of Agriculture may authorize the Angeles Crest 100 competitive running event to continue in substantially the same manner and degree in which this event was operated and permitted in 2015 within additions to the Sheep Mountain Wilderness in section 523 of this title and the Pleasant View Ridge Wilderness Area designated by section 1802 of the Omnibus Public Land Management Act of 2009, provided that the event is authorized and conducted in a manner compatible with the preservation of the areas as wilderness. 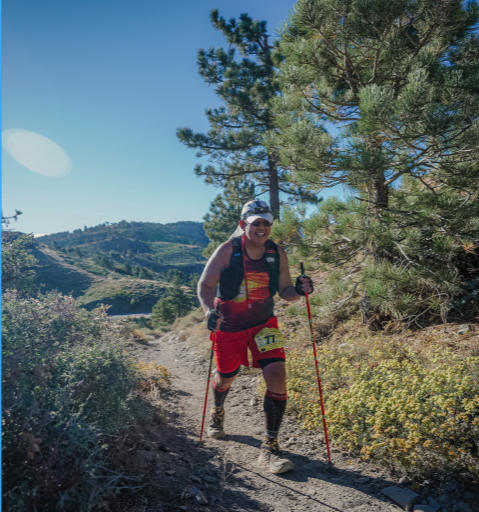 We need your help to reach out to your Senator to help get AC100 trail access and prevent the race from becoming a road race.

Contact your Senator via their website. Copy and paste the following letter (add your name/title) and add your personal story as you see fit.

If no response comes within a week, call the office and request a response. Remember, your Senator works for you!

I am (fill in your name here), a (participant/volunteer/supporter) of the Angeles Crest 100 Mile Endurance Run(1). As a constituent, I am writing in hopes that you can help this historic event of 32 years continue to exist. Since 1986, runners have gathered at the race’s start line in Wrightwood, CA to test themselves along a 100 mile course that runs along the Pacific Crest Trail and other Angeles National Forest trails ending in Altadena (2). The race has a proud tradition in conservation in requiring every runner to complete 8 hours of trail work. This has resulted in tens of thousands of volunteer hours that have removed downed trees, built retaining walls, cleared brush, and rebuilt trails destroyed by fires and floods (3). In 2002 and 2009, fires prevented the race from taking place, but now in 2019, the extension of the Sheep Mountain Wilderness in the San Gabriel Mountains Foothills and Rivers Act might permanently prevent the race from taking place due to wilderness designations preventing us from using several key trails.
As you may be aware, the National Forest Service has a regulation for wilderness permitting that prevents footraces from using wilderness trails. We have tried without avail to get an exemption to use wilderness trails. This has resulted in the course requiring the addition of 8 miles of running on Highway 2 (Angeles Crest Highway) (4). This is a 55 MPH single lane mountain road, that we have been trying to avoid using for aesthetic and safety concerns. With the addition of the Sheep Mountain Wilderness expansion between Baden Powell and Mt. Hawkins, we will now need to run 20 miles of the race on Highway 2. The progression of wilderness expansion has changed the race drastically and create a road race that will be unsafe for runners.
I implore you to consider allowing:
1) A “cherry stem” that excludes the Pacific Crest Trail from the wilderness designation as was done for the Trail Canyon Trail in the Yerba Buena Wilderness. (5)

2) A provision in the bill that allows the Angeles Crest 100 Mile Endurance Run access to Wilderness Trails. There is precedent for this, as the Western States 100 Mile Endurance Run in the Tahoe National Forest is allowed through the Granite Chief Wilderness through legislation passed in 1988(6).
The common goals of the Angeles Crest 100 and the San Gabriel Mountains Foothills and Rivers Act are increasing conservation and recreation opportunities for members of our community. I see no reason why we should not be able to work together to maintain trails and allow access to endurance runners. Please let me know when we can meet to discuss this further.
References Cited:

Dominic Grossman, Adan Ortega, Ellen Kenney, Lauren Le Pagne, and Katie Grossman for helping this important legislation become a reality for our historic race and each and every runner who did trail work with Gary Hilliard and Hal Winton over the years.